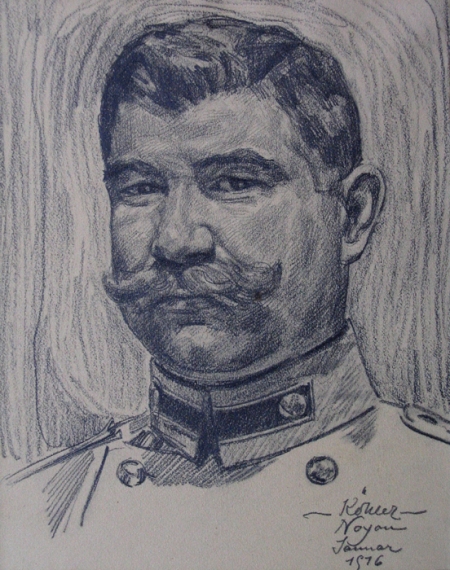 I have long suspected that all the treasures comprising the antiques trade have by now been sourced, identified and marked to their full current values. Given the televisual super-saturation on this theme, the chances of discovering anything approaching a bargain must be pretty close to zero. However, if you prefer artefacts whose worth cannot be marked in hard currency, there may be hope. Several years ago, I acquired this drawing of a military officer for something less than twenty pounds, from an auction house in Bridgenorth, Shropshire. How he got there I have no way of knowing. I had hoped that there may be some hidden clues waiting between the drawing and the frame’s rear panel. The frame was suitably old and the window mount foxed with age, so I carefully prised away its back with anticipation, but previous ‘tomb robbers’ had broken in first; replacing any original packing with a couple of pages from a 1980’s Daily Mail…
I am no expert in military costume and would welcome correction on this point, but I intuitively felt from first sight that this man was an officer of the German Army. After all, his appearance conforms to that “Prussian” persona so beloved of the national stereotypist; squared jaw, strong neck and full moustache. [Where is the monocle?] However, even a shallow trawl through any photographic record of the Great War shows us that the differences in appearance are between ranks, [and class] and not armies – compare British C.I.G.S. Sir William Robertson’s appearance with any of equivalent rank across the lines at German High Command; they are interchangeable. What actually indicated nationality of origin to me was a technical component of the drawing itself; the line of strange, stylised background swirls. These were characteristic of innumerable German Expressionist woodcuts of the time.
I would surmise that this drawing was executed by someone who had at least a minimum of academic art training and a working knowledge of contemporary drawing style. Operating behind the front line as an artist conscripted into the army, or on the home front as a student whose studies had been interrupted by world war, he was utilising his skill to produce works for the officer class. The head is fixed on the paper with a firm line rather than a sophisticated contour, but this is just the type of figure edge one sees in the contemporary drawings of a society portraitist like John Singer Sargeant; an example of a European-wide salon style. The pencil hatching follows around the form of cheeks, over fullish lips and around the chin with a lightness of touch typical of portrait drawings of the time. Modern portraiture tends to steer clear of softening effects; facets which unequivocally model form are currently preferred to blending and softening techniques. Yielding, fleshy softness is now the preserve of photography. Yet here, this hatching is still able to indicate form; note how a 180 degree change of hatching angle on the nose tip pushes this form well forward of the cheeks. The softness of flesh is held resolutely in check by the stiffness of the tunic collar, thereby stabilising the unmilitary weakness of the jaw line. The hair is depicted through a series of small planes, which convincingly follow the head structure beneath; contrast this with the rendition of individual hair strands in the moustache. The buttons are cursorily scribed, but still achieve the appearance of polished brass.
What I find particularly poignant about this work is the date; January 1916. Unless the subject of this portrait was a military adviser to the Turkish Army, which had decisively repelled invasion the year before, he was likely to have to face action of the utmost ferocity at some point that year. Repelling the Brusilov offensive in the East, or enduring Verdun and the Somme in the West. Might he have faced the battalions of my West Yorkshire forbears at Serre on the first of July? There, on that morning, my great-grandfathers prepared to advance on a tribe who had burned history and knowledge in the medieval library of Louvain within days of their incursion through the Belgian frontier and who thereafter practiced ‘schrecklichkeit’; terrorizing civilians on both land and at sea. These British troops had been reliably informed by their leaders that this Teuton and his ilk had bayoneted babies, cut off the hands of children, and used live priests as bell clappers.
Now the fog of war has cleared, the imperial propagandist’s black arts have been scrutinised and deconstructed and ninety years later, a little piece of a lost world hangs in my study. Here is a man, his history obscure, this displaced portrait of him forever lost to his family. An essentially benign man, his severe collar is not quite able to squeeze the smile from his eyes. Unlike my forbears, I can only hope that he survived his ordeal with this sympathetic demeanour intact.
Glenn Ibbitson
This article first appeared in “Carmarthenshire Life”; April 2006